In disaster situations, first responders often bear the same life-threatening risks as the victims themselves. Find out how DJI’s unmanned first responders can increase the chances for success of any rescue operation and save more than just the lives of disaster victims.

The call for heroes

When Kenny Åserud answered the emergency call on December 30th, 2020 at 4:00 a.m., he did not expect it would be the start of the longest and most challenging rescue mission his team had ever faced.

The scale of the situation quickly dawned: this was the biggest landslide disaster in Norway’s history, spanning two (2) square kilometrrs, and affecting the village of Ask in Gjerdrum. With temperatures as low as -23°C, Kenny and his colleagues would need to locate survivors as quickly as possible and risk their own safety in the process. 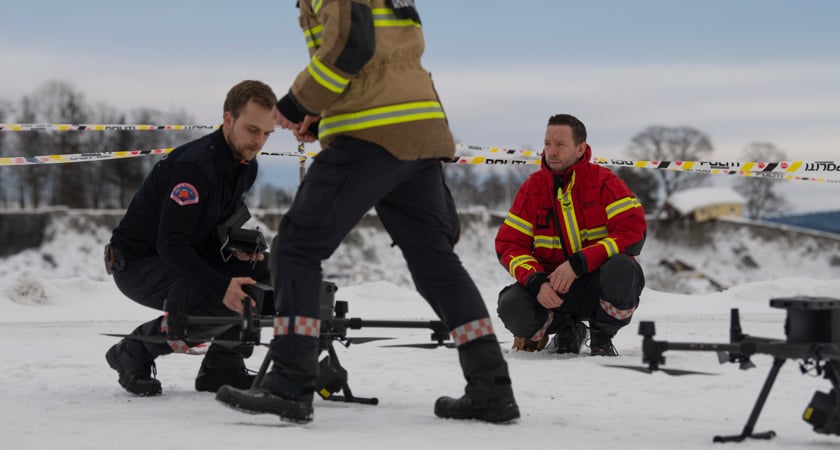 The Norwegian emergency services are trained to use drones in rescue missions to gain a detailed overview of the disaster site. The primary goals are to map locations of possible survivors and to mark out potential hazards for the rescuers themselves. Faced with such a large area of devastation, drone assistance would be invaluable.

When the rescue helicopters had airlifted the first survivors to safety, the drone operators launched DJI Matrice 300 RTKs to start mapping out the area, enabling the command center to coordinate the search from a safe distance. With drones continuously in the air for the next 40 days, this became Europe’s largest drone rescue operation to date.

Drones can see what humans can’t

As the airspace was initially occupied solely by helicopters, the first drone deployment was only possible after nightfall when both human vision and conventional camera imaging were all but useless. However, the drones that were deployed utilized the Zenmuse H20T thermal vision payload to create a high-resolution map in the dark.

Nicholas Newhouse, one of the drone operators, also emphasized another important benefit of infrared mapping: the reduced file size of infrared images compared to traditional photographs. This allows for a much shorter processing time, giving the rescue workers an opportunity to work with the finished map just five hours after the initial drone launch. In fact, it only took one hour for the infrared images to be processed into a finished 3D map after the drones landed. The map was then made accessible to all emergency services involved in the mission, giving them the information they needed to safely navigate the disaster site in the dark.

The 3D model map of the area, finalised within the first 24 hours, proved to be a critical source of information as it provided comprehensive situational awareness to ensure a safe and secure rescue operation.

“Having access to precise, up-to-date, high-resolution maps of a disaster area in such a short period was unprecedented.” – Dan Richard Isdahl-Engh, Data Analyst

Situational awareness is a marathon, not a sprint

Having a map helps to get a detailed impression of the situation and possible hazards. However, in the aftermath of a landslide, one major risk for survivors and rescue workers alike is the broken structural integrity of the soil which might lead to subsequent landslides. In order to assess any risks in that regard, multiple maps are created in periodic intervals.

The DJI Matrice 300 RTK allows for pre-planned fixed flight routes which makes comparing mapping results much easier since the positions and waypoints from which the ground was surveyed did not change with each flight like they would if the photos had been taken from a helicopter. This allows for an accurate analysis of changes in the environment that hint towards structural hazards in the ground. 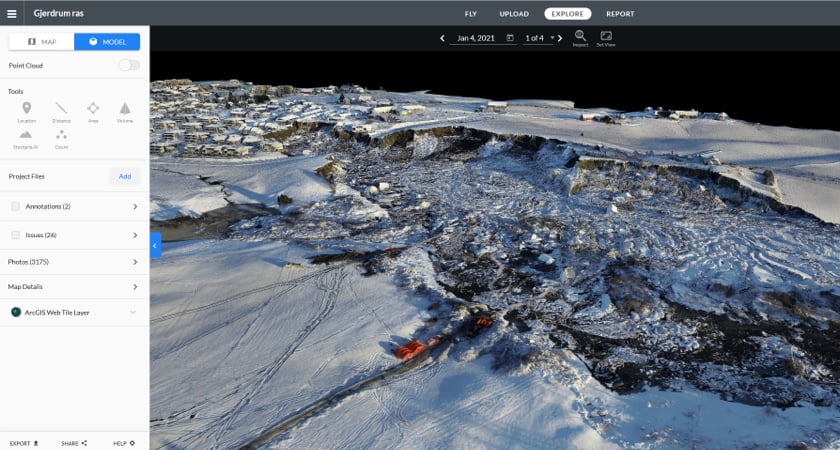 An interactive 3D model of the area aided in providing the rescue teams situational awareness.

The advanced navigation software in the DJI Matrice 300 RTK also made cooperation between the drones and helicopters, which were often simultaneously in the air, much easier. This software in connection with an excellent communications strategy all but eliminated the risk of dangerous encounters between the different types of aircraft in the shared airspace.

According to Dan Richard Isdahl-Engh, who was the data analyst using drone maps to gain situational awareness for the rescue mission, having access to precise, up-to-date, high-resolution maps of a disaster area in such a short span of time was unprecedented. In earlier natural disasters, the team would need to wait for satellite imagery which only offered low-resolution, out-of-date, static images. 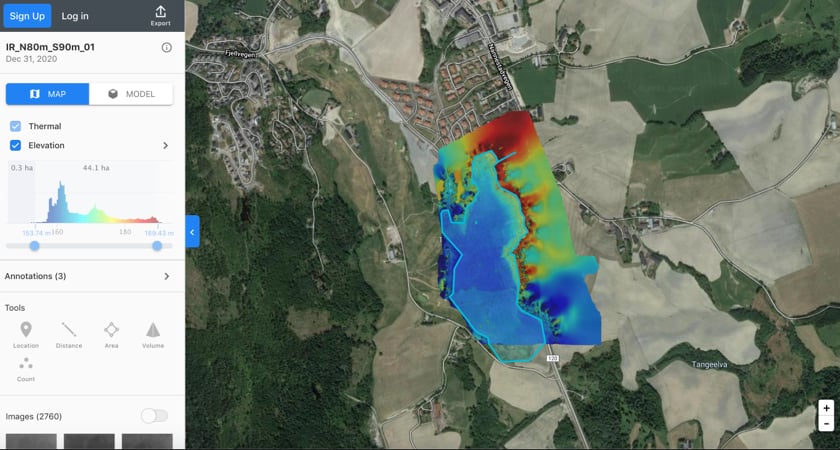 With volume measurement, it was possible to quantify the amount of earth that was moved.

Helicopters are vital for retrieving survivors quickly, but they are not ideal for mapping missions due to their narrow field of view and the amount of turbulence created by their rotor blades. Whirled-up debris from destroyed houses and objects poses a threat to rescue workers’ safety and in sub-zero temperatures, the whipped-up cold air can make it unbearable for personnel on the ground. Drones are much better suited to this kind of mission.

Even though the soil in Ask was mostly mud which blocked much of the heat from anything buried deep within it, with the Zenmuse H20T thermal vision, the drone operators were still able to identify the heat signal of a trapped dog 22 hours into the operation. Since the rescue helicopter took some time to reach the dog’s location, one DJI Matrice 300 RTK drone was deployed to hover the location to make sure the dog stayed put and marked it with a constant searchlight until the dog was lifted to safety. This highlights another feature of the DJI Matrice 300 RTK – drone operators were continually impressed by its flight time capabilities and long battery life, even in the constant sub-zero temperatures. 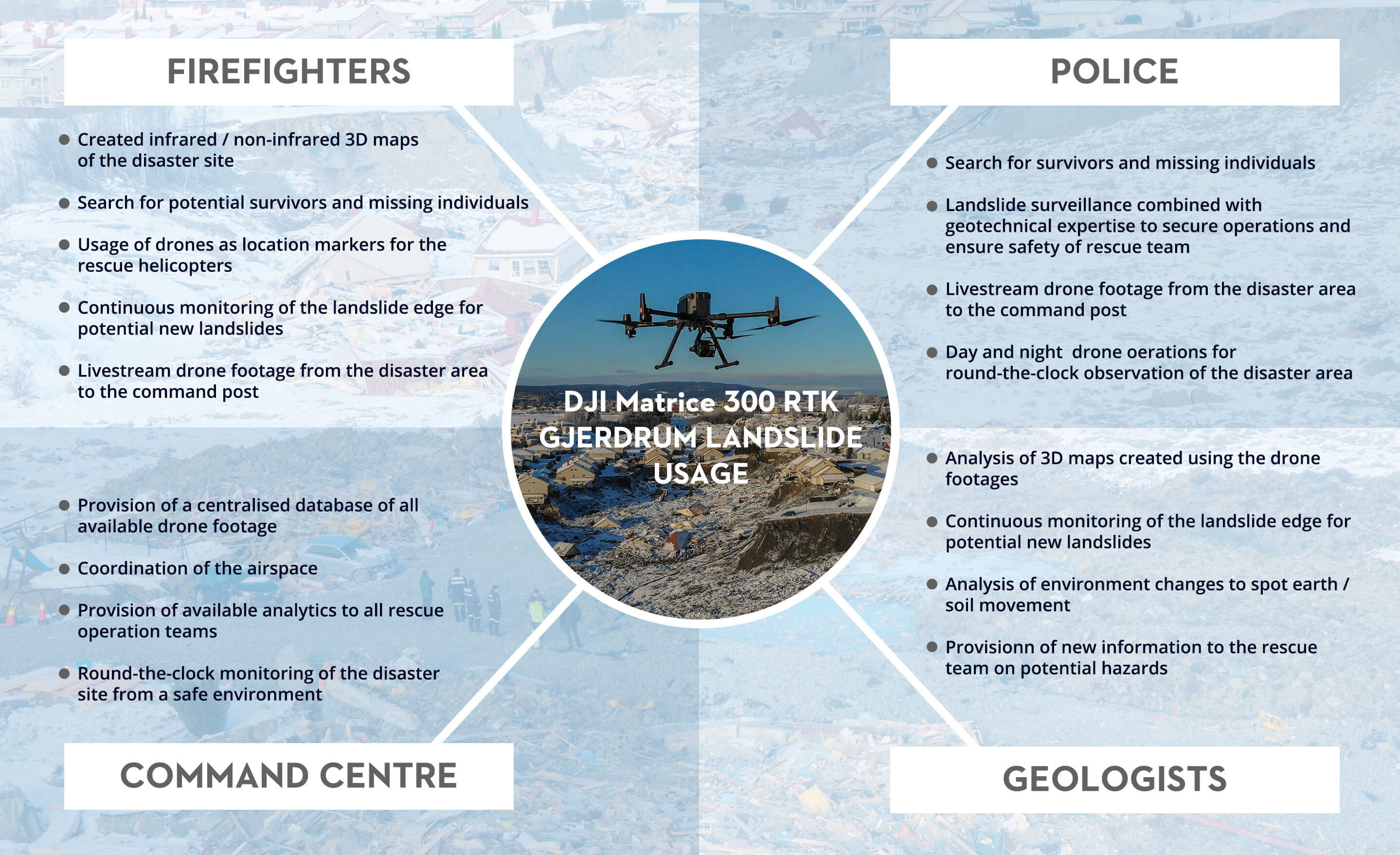 A snapshot of how the DJI Matrice 300 RTK was utilized and maximized in the rescue operation of the biggest landslide disaster in Norway’s history.

Overall, the mission lasted for over 40 days, in which the rescue workers were ready to risk their own safety to save others. They were supported by over 270 hours of drone flight-time, providing the rescue workers with real-time, overhead footage and the analysts with accurate maps of the situation that they could use for risk assessment and predictive analysis.

According to the rescue team, using unmanned DJI drones allowed them to push the limits of the operation, and do things previously unthought-of; such as using drones as makeshift battering rams to break windows through which a second drone could fly in. Even though DJI drones are not generally supposed to be used in this way, they highlight the true benefit of drones for rescue operations: the ability to do whatever it takes to save lives without risking the health and safety of the rescue team.

The most important component of any mission is a comprehensive set of intel. It lays the groundwork for each operation and ensures that decisions are being made in an educated manner. In a mission like this one, which lasted for over 40 days under extreme conditions with temperatures as low as -23°C and winds of up to 18.4 m/s, rescue teams need as much reliable information as possible to make their mission a success. 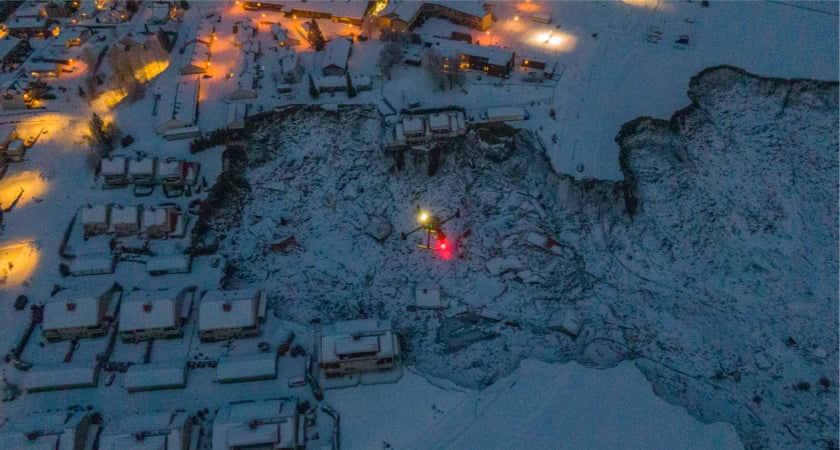 The rescue mission in Ask, Gjerdrum was one in which firefighters, policemen, military personnel, drone operators, helicopter pilots, analysts, Andøya Space, Norwegian Geotechnical Institute, and even the residents worked together to save lives. It was a deeply moving display of human resilience and kindness. People came with food, drinks, and emotional support for the rescue workers. On New Year’s Eve, one little boy offered his chocolates saying that the rescuers needed it more than he did. A perfect illustration of how this community gave everything they could to support this operation.

DJI is proud to have been a part of this collective effort to save lives and help protect the safety of first responders and rescue workers. 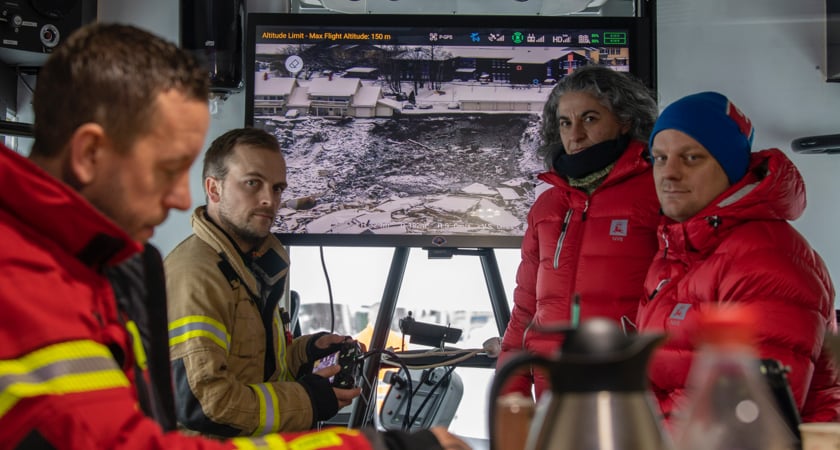 Increase the success of your rescue operation with the DJI Matrice 300 RTK.

UAS Norway, the UAV organization in Norway played a central role in ensuring that flight safety and integration of drones from multiple operators, both manned and unmanned were optimized in the days after the landslide. They worked as a connection point between national airspace service providers (NASP), aviation authority (CAA), and incident-commander from the police to ensure that drones could be used as much as possible, often side-by-side between unmanned and manned resources at Gjerdrum.

How to choose a camera for drone imaging

RUAS partners with DJI and Heliguy – Guide to Drone Inspections

Firefighters Use Drones and Software to Provide Crucial Disaster Relief